As several established Madisonians know, The Livingston Inn is identified more formally as the William T. Leitch House.  This is the name given to the house when it was placed on the National Register of Historic Places in 1972.  William T. Leitch was the original owner of the house, overseeing its construction in the 1850s.  The Livingston Inn was the name given to the house when it became a B&B in the mid-1990s.  In its history, our home was also called the Harman House, named after the long tenure of Gordon and Dolly Harman at 752 East Gorham from the mid-1950s to 1990s.  To this day, some Madisonians still refer to the house as the Harman House.

Since we bought the house in 2011, we have been so fortunate to become close acquaintances with Gail and Jacqui Harman, daughters who grew up in the house while their parents owned it.  It’s a treasure to us each time they stop by to visit, and they have been so generous sharing memories and little saved mementos from their years living here.  We sometimes go around the house with them, and they tell us cherished details about how the house was arranged many years ago, so different now that its rooms are re-designed for a B&B.

Recently, we were pleased to welcome Jacqui Harman back to the house along with Gail’s daughters and their children.  Gail was not here for that visit, but following it, she sent along some items she had held onto as a memory of this house, and we’d like to share a couple of them with you.

First, Gail sent a newspaper clipping from the Wisconsin State Journal on Sunday, September 16, 1979.  The article featured owners of three homes on the National Register of Historic Places, one set of owners being Gordon and Dolly Harman.  The article emphasized the trade-off of not having every modern-day convenience in order to live in a historic home.  Items like amount of space were noted as an advantage while challenges focused on heating and cooling.

At the time, the Harmans were dedicated to living in the house as true to the history as possible.  Dolly explained, “Our kitchen sink has legs.  We have no Formica or any of the conveniences that everyone takes for granted.  This includes an automatic dishwasher, though we do have a freezer in the basement so I don’t have to shop for food every day.”

The Wisconsin State Journal article also featured several photos that we thoroughly enjoyed.  Anyone who has used our west stairwell will recognize a photograph of a chandelier still hanging there as you proceed up the stairs. 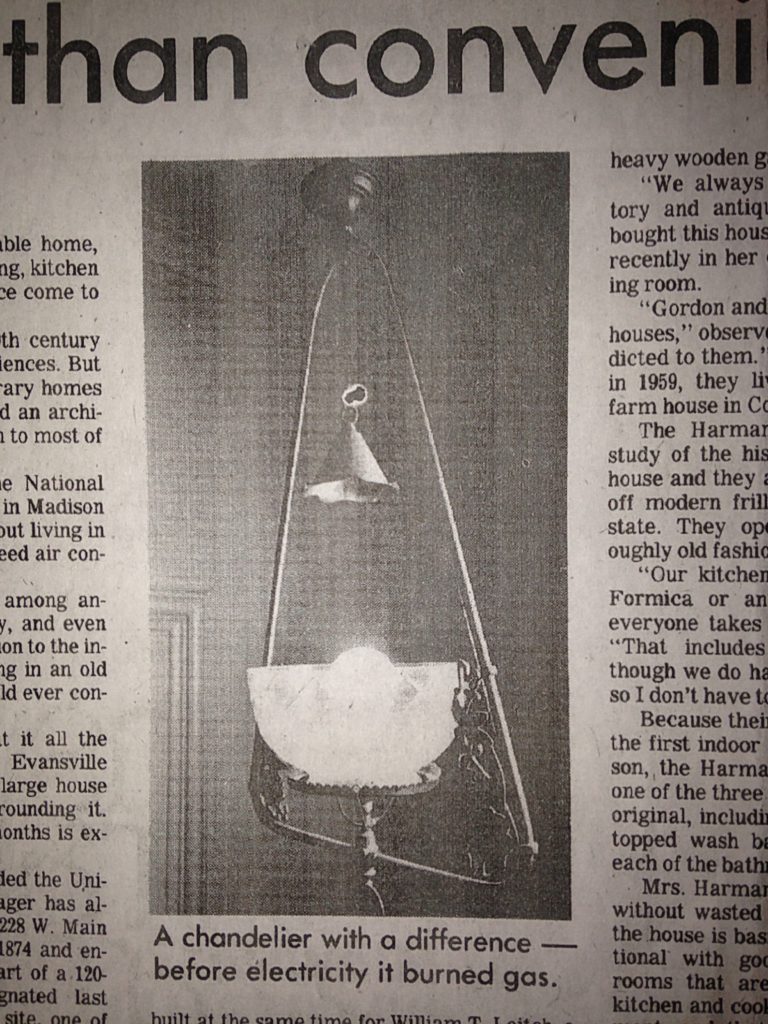 Guests who have stayed in the General Pickering room might recognize this photograph from the bathroom.  Someday we’d love to bring back a pull chain toilet to this bathroom, and we were so happy to see that’s what the Harmans had in place. 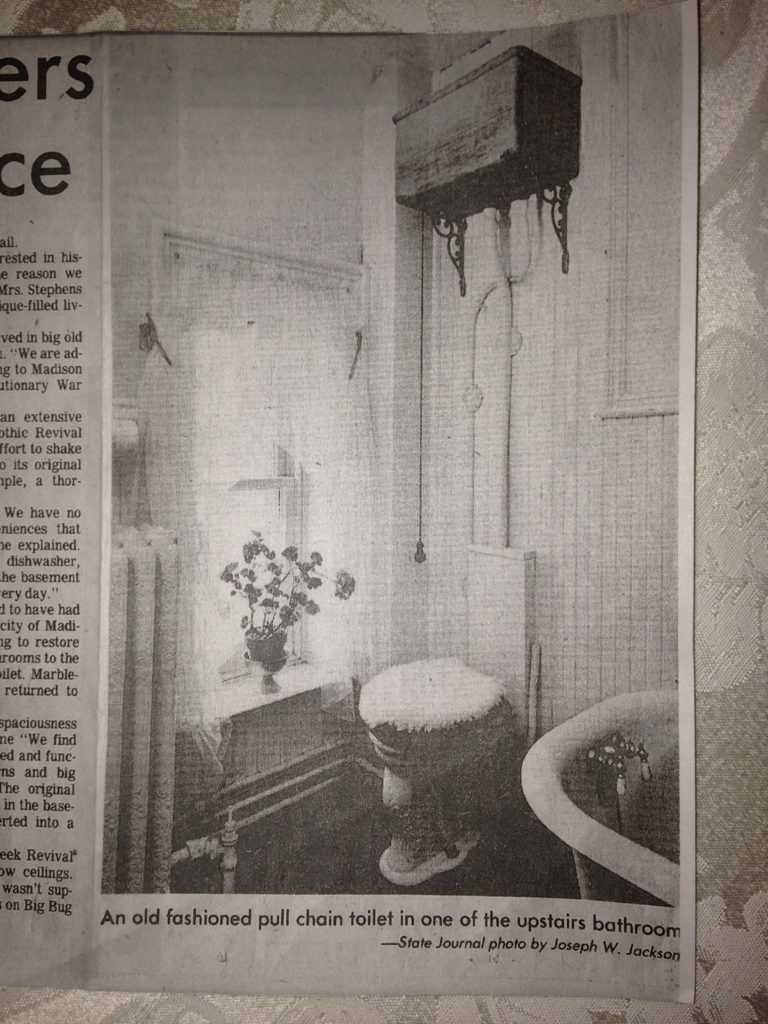 There was also a photo of Dolly Harman at what must be the dining room window as those windows are the only floor-to-ceiling ones in the house.  The Harmans loved the shutters on their windows, and we are sad to say they were gone when we arrived.  The radiator, though, remains in the same spot, maybe considered more decorative over the years but still serving its purpose. 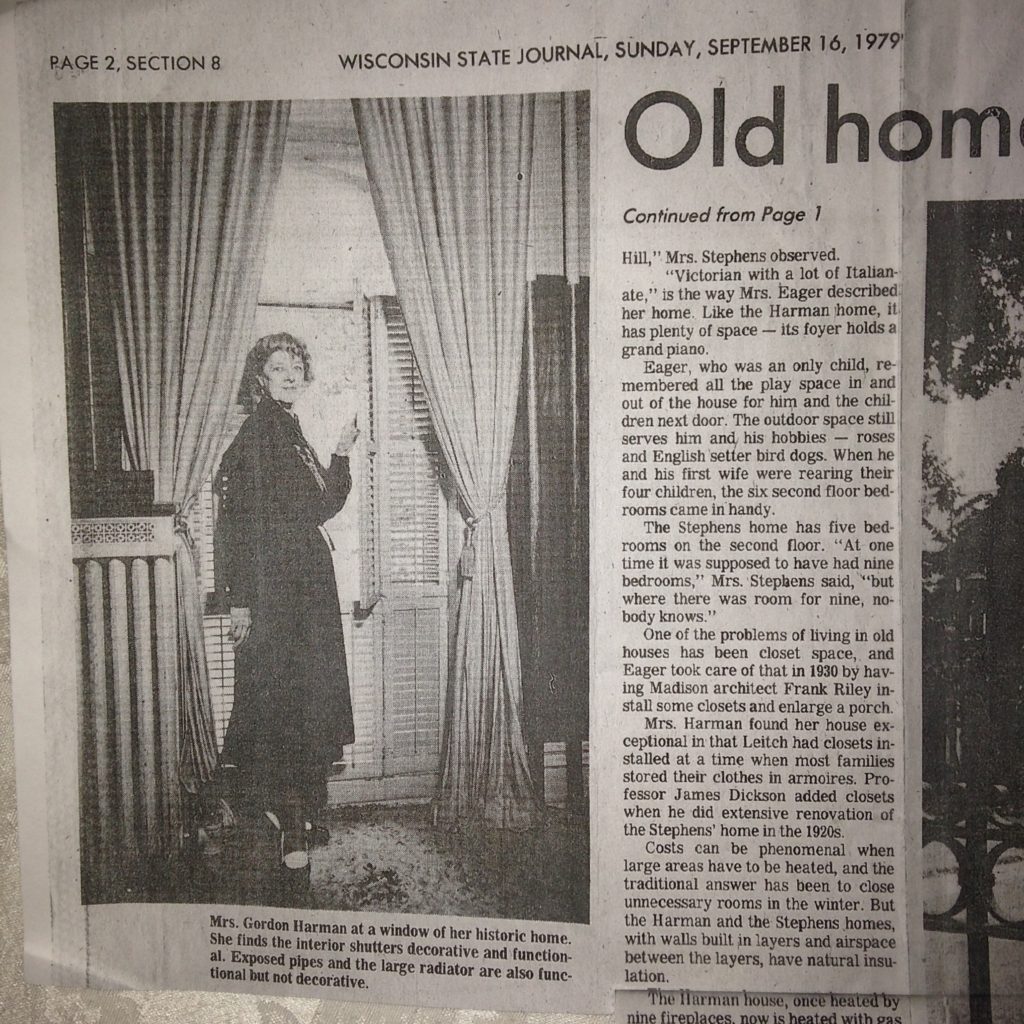 Finally, there is a photo of the exterior of the house looking through the wrought-iron fence that still is a prominent feature of this house.  Back then, the trim was painted white, which gave much more emphasis to the “gingerbread” look of the house.  Gone are the vines, which nowadays masons and landscape architects advise are not healthy for the long-term health of the sandstone structure. 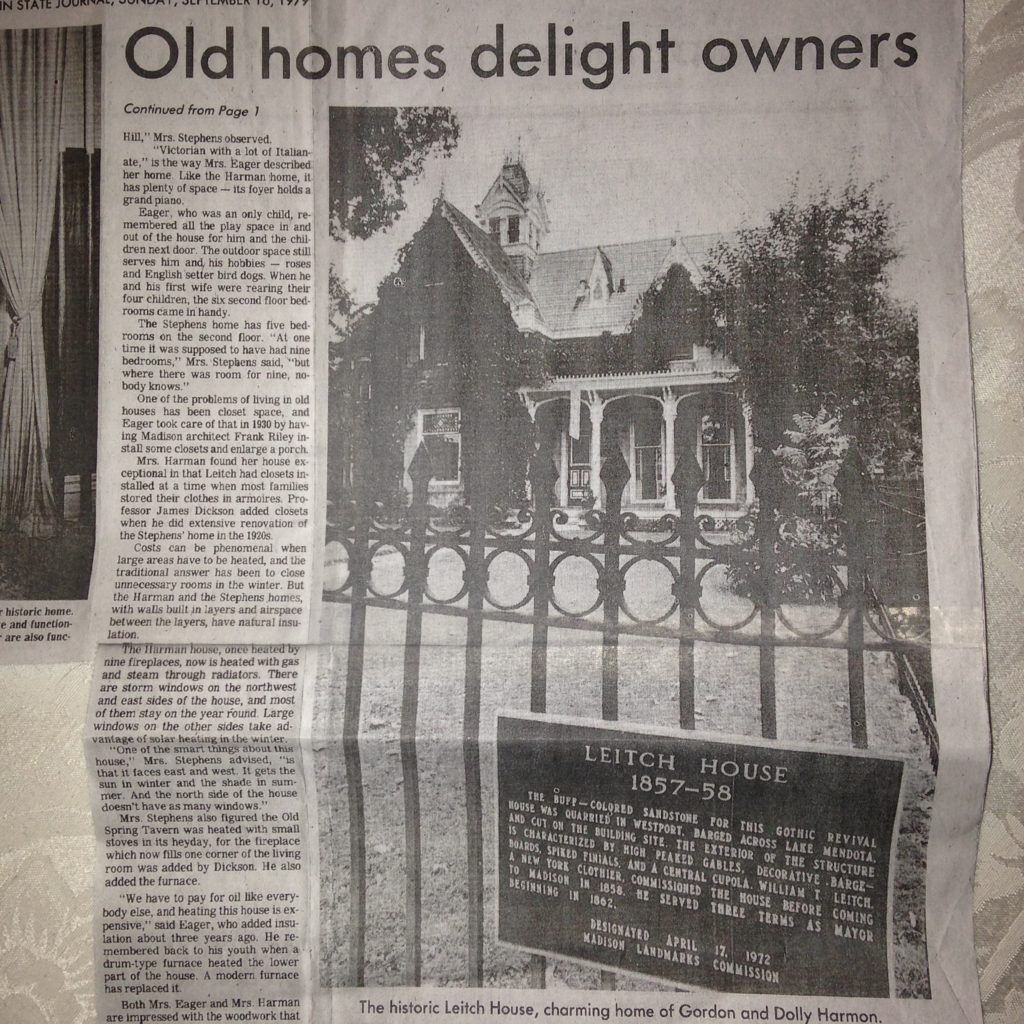 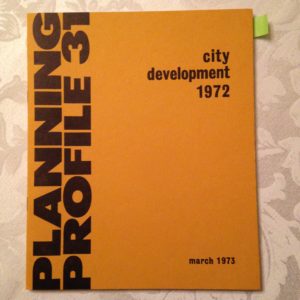 In addition to the article on the William T. Leitch House, Gail sent along a City of Madison 1973 edition of the Planning Profile.  The profile has many interesting facts about the city in 1972.  Among them, it notes the area of the city is 50.8 square miles.  Today it’s considered around 77 square miles.  Gail sent us the Planning Profile because it also notes 1972 was the year that our house was designated on the National Register of Historic Places.  You’ll also see a photo and reference to the “House of Harman” on this page. 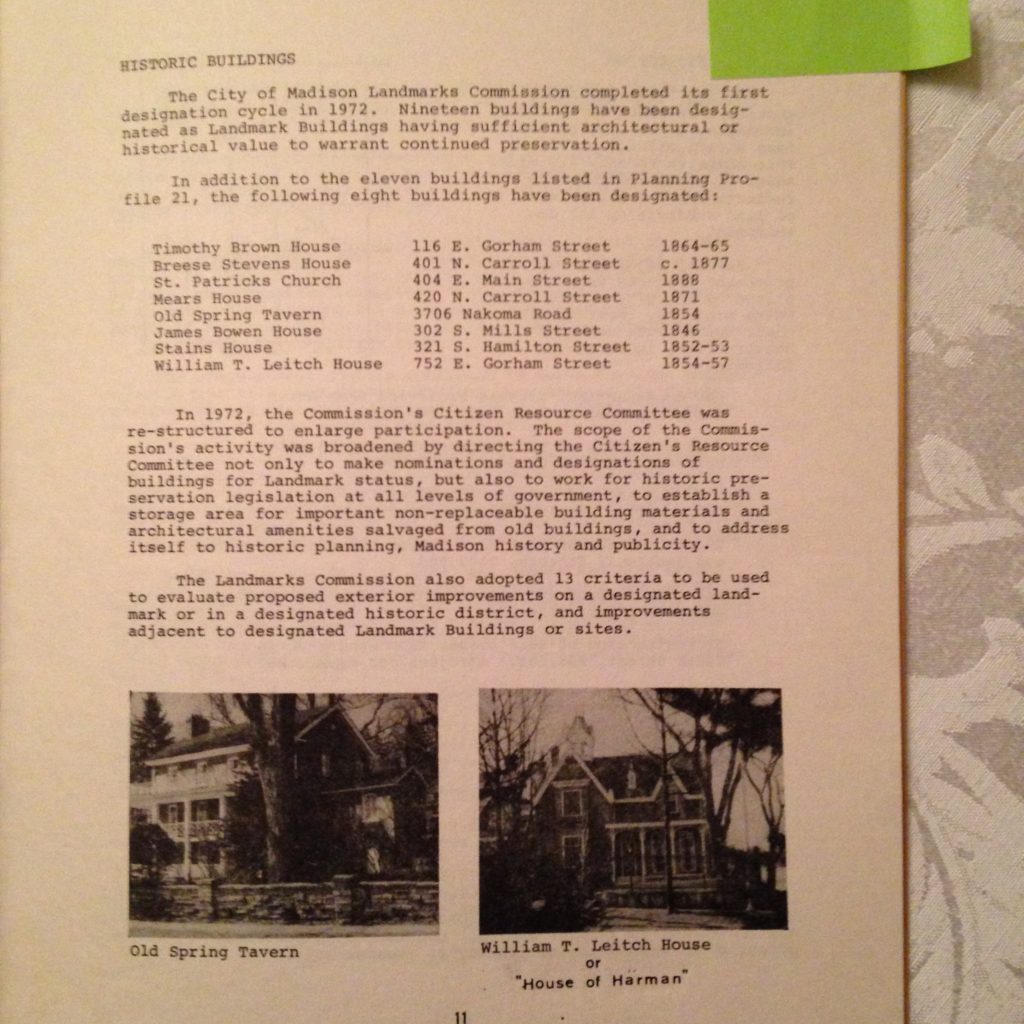 There were several other little treasures in Gail’s packages, but I’ll end with a striking photo inside the front cover of a 1992 Wisconsin Historical Calendar.  While 1992 is recent history, the photo shows a view in 1898 from one end of UW-Madison looking toward the State Capitol.   The iconic Red Gym is on the left and the State Historical Society building is just under construction.  But what is stunning about the photo is the grandeur and size of the State Capitol building looming on the horizon.  To this day, guests are so impressed with our Capitol building, but back in 1898, this must have been an architectural marvel to city dwellers and visitors alike. 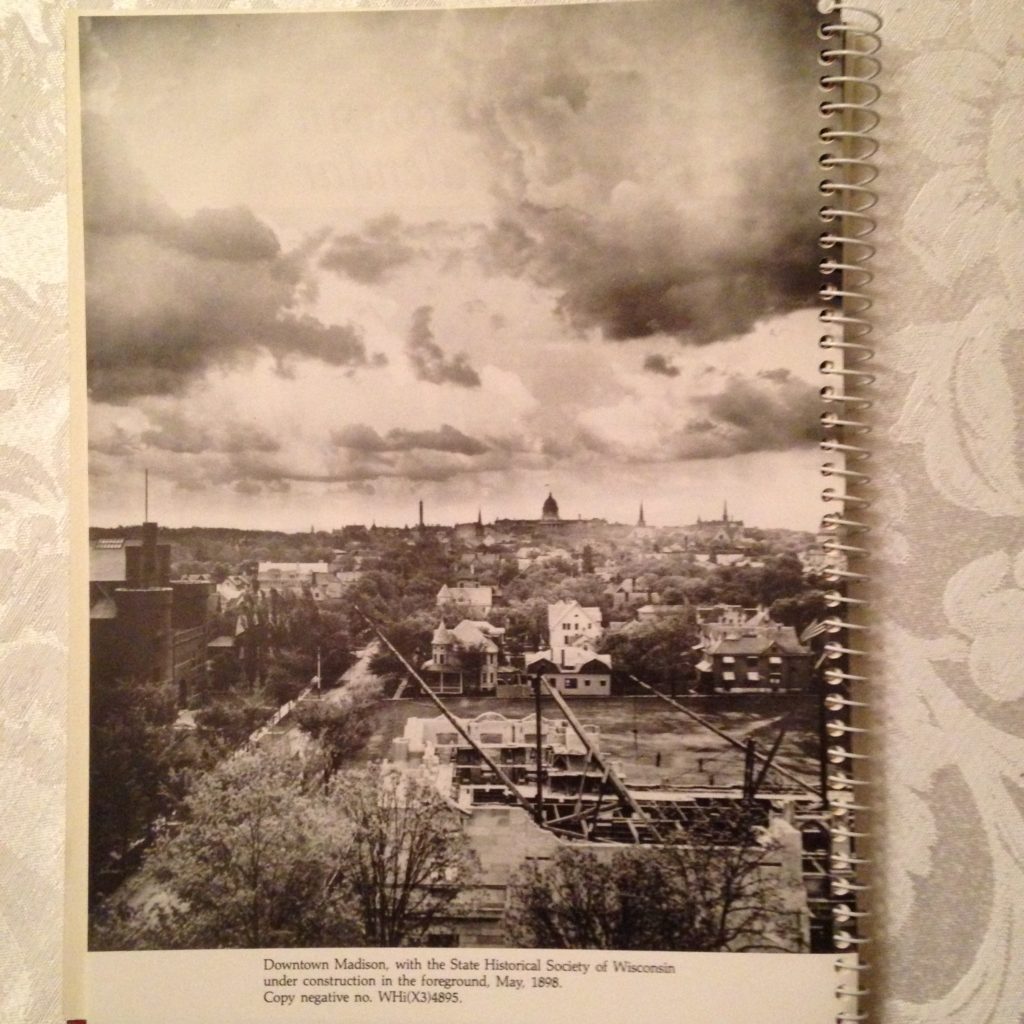 We hope you enjoyed these history highlights of The Livingston Inn, also known as the William T. Leitch House, also known as the Harman House, provided by one of its former residents.  We regularly research and receive information about the history of the house and hope to share more stories with our readers and guests in the near future.

PrevPreviousTis the Season (Not the Holiday One)
NextThe Best Spot AroundNext